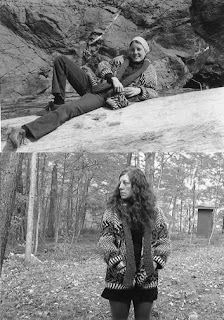 This past fall my mom gave me this sweater I always remember her wearing as a kid. I just sent it over to the blog "My Mom, The Style Icon". Here we are 30+ years apart, probably even around the same age in these photos wearing it. If you were wondering it's the perfect combo of black, gray and red. My mom wasn't only a style icon but a major reason I do what I do with my life.
Posted by Faythe Levine at 4:59 PM 1 comments

Somehow I've gone 32 years without ever seeing either of these amazing shorts both narrated by Orson Welles. The short animation above is from 1970 and won the last "Short Subjects, Cartoons" Oscar in 1971 before it was renamed "Short Subjects, Animated Films".

This is my final post from my very short trip to SF where I crammed it all in. On Friday when Lisa & I were zipping around from A ----> Z people kept mentioning this new spot that had opened near the beach, oddly enough blocks away from where I did the studio visit with Jeff Canham (it's all connected you know). We trucked on down there making sure to stop at Mollusk which is right there in the same hood. General Store is just perfect. Aesthetically similar to Gravel & Gold but different enough that I could regularly shop at both spots. I was bummed that I was missing their grand opening party the next day, but so hyped that I got to see the shop right when it opened so when I return I can witness the growth. Especially with the green house they were still building in the back. I wish General store proprietress, Serena Mitnik-Miller the best of luck with her new space and suggest you swing by if you have the opportunity.

the green house in progress

View all the San Francisco photos from PART 1- PART 5

{thank goodness places like this exist}
Posted by Faythe Levine at 11:42 AM 0 comments

If you have ever walked down Valencia in the Mission you have most likely passed Dog Eared Books. You may of noticed the patchwork of paper illustrations taped up there. Possibly you might of even stopped to realize that they are actually obituary's, and those obituary's may make you think about what incredible things people accomplish in their lives. You perhaps learn about someone new you didn't already know about, someone who graced the world with their talents. I find myself thinking about how fragile and short life can be when I stop here.

These drawings are by artist Veronica De Jesus who works at the book store. I have shown her work in the past at my old gallery and feel lucky to own the book that was published in 2009 of her memorial drawings (now sold out). If you find yourself on Valencia, I suggest swinging by Dog Eared and spending $1 on the reproductions (that are stickers) available in the case near the register. I helped myself to a Bea Arnold and went on with my walk. The San Francisco Guardian sums up Veronica's work nicely:

On the corner of 20th and Valencia streets, there's a window that makes people think of the dead. The reason is a series of annotated sketches that, over the past few years, has gradually accumulated on the glass to the right of the doorway at Dog Eared Books. A sort of eulogistic message board for drifting window shoppers, these paper notices gently call attention to the passing of poets, visual artists, writers, teachers, and other cultural heroes, some renowned, some formerly celebrated, and others largely unknown though not to Oakland artist Veronica De Jesus, the creator of this memorial window.

Now, with the window grown crowded, another local artist and a friend of De Jesus's, Colter Jacobsen, has published a collection of the memorials (Allone Co., $18). Tributes to Susan Sontag, Jacques Derrida, Robert Creeley, Octavia Butler, Will Eisner, Quentin Crisp, Richard Pryor, and Rick James are interspersed among pages dedicated to death row prisoner Stanley "Tookie" Williams; Al "Grandpa Munster" Lewis, whose roles also included circus performer, Pacifica radio host, and Green Party candidate for governor of New York; the New Zealand experimental novelist and poet Janet Frame; and "Don" Magargol, a folk dance instructor at San Francisco's Lighthouse for the Blind and Visually Impaired. The spiral-bound notebooks in which these memorials are collected and the cover image, a drawing of a largely denuded but vibrant dandelion superimposed on what looks like crumpled paper that's been imperfectly smoothed out suggest a continued meditation on impermanence and remembrance, the attempts we make to prolong or enlarge the presence of our heroes and loved ones in the world after they leave us.

When I took this past trip to San Francisco I stayed with my friend Lisa Congdon. A lot of you may be familiar with her artwork & illustrations. She has also recently got a lot of press for her collections project she is doing this year. Lisa took a day off from her busy schedule and we zipped around to a ton of places (some of which I have posted already in PART 1 & PART 2) we also stopped by her studio so she could quickly photograph some Valentines for her Sunday post.
I thought with all the recent talk about her collections it was extra cool to get this shot documenting her documenting. Does that make sense? Whatever, you get it...

And also to see Maya Hayuk's exhibit at Gallery 16

I first heard about Gravel & Gold from my friend Ira Coyne who was doing an artist visit this past fall pin striping cars//bikes//or whatever you hearts desire right out front of the shop. Their website drew me in and I knew I was going to love the space once I got a chance to visit. And guess what, I did. Two of the three owners were there when I showed up totally unannounced asking to take pictures, Cassie McGettigan and Nile Nash. I didn't get to meet Lisa Foti-Straus but imagine she is just as lovely and kind as the other girls.

ALERT ALERT ALERT!! If you live in the San Francisco area you should GO to the OSBORN/WOODS poster show opening this Friday February 12th 6-9. On exhibit will be 19 framed original prints from the 1960s as well as original postcards that are in stock until supplies last (only $8 a piece, see images below). I am so bummed I can't go, Charles Woods will event be in attendance! 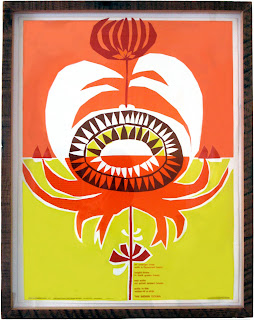 For over fifty years, David Osborn and Charles Woods have been an artistic force in Nevada City, CA. They landed in the old mining town in 1957 after meeting as graduate students at UC Berkeley and went on to run a design and print shop, found the American Victorian Museum, and begin broadcasting the community radio station KVMR. Their bright, enthusiastic lithographs are reminiscent of Sister Corita Kent and the best of 1960s design. Gravel & Gold has assembled 19 original prints from the Seasonal, Ocean, Natural Guide, Travel, and Apocalypse series.

Nile (above) & Cassie showed me some of the Osborn & Woods prints they have on hand including "THE CARIBBEAN SEA" pictured here.

THE CARIBBEAN SEA
Posted by Faythe Levine at 8:40 AM 0 comments

I flew into San Francisco last week Thursday morning and left by early Saturday. I somehow crammed in an insane amount of stuff into a very short amount of time. I'm not gonna lie, I always get a little jealous of what is going on in SF, there is such good people & things happening there. I took A LOT of photos on this trip so I'm going to break my posts down into parts to keep shit organized.

Also, check out the blog for my new documentary I am working on with Sam Macon about Sign Painters. There is a bunch of photos from a studio visit I did with Jeff Canham the first day I was out there. His work is amazing....

Starting with the random photos and moving onto people & places in the next few posts:

Brunch with my hostess with the mostess Lisa Congdon

Maxwell Loren Holyoke-Hirsch mural in the bathroom of Rare Device