My cup runneth over with work and apparently I'm not good at blogging any more. During this 22 hour stint home between cities on tour with my movie I wanted to make sure an blog about the 25th Anniversary of my partner Aaron Polansky's skateboard shop. As you may know I have had my gallery posted up in the back of his store since 2010, which has been amazing for me (it's two blocks from our house). But way more importantly are the things that Aaron has accomplished over the years with Sky High. His endless energy to connect with kids, do community outreach and make shit happen amazes me daily. I mean this guy picks up the garbage on his way to work everyday on the street. Unreal. CAN YOU IMAGINE YOUR BUSINESS TURNING 25?! I am so proud to say the least. If you happen to be in Milwaukee July 6th, please swing by and celebrate with us!

Before you read the history of Sky High below (which you should because it's amazing) I wanted to mention our current exhibit in the gallery with Kyle Ranson just got a little write up on Juxtapoz and my movie, Sign Painters just got a glowing review in the Boston Globe. 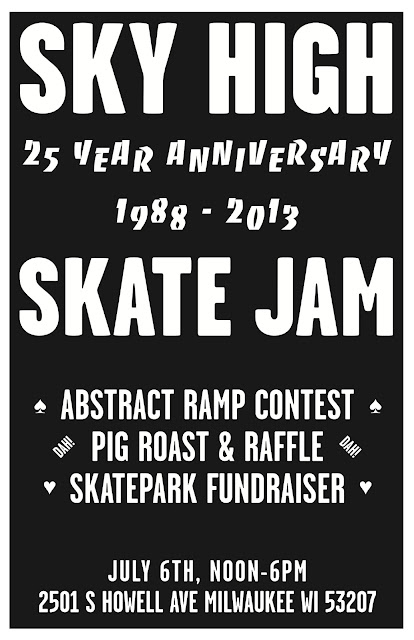 1988 George and Dimitri Dimitropoulos open Sky High on Douglas Avenue in Racine, both were still in high school. This location was the first skate only skate shop in the area.

1990 George Dimitropoulos convinces the Racine YMCA into renting out a room in the basement for an indoor skatepark during the winter months. It was a big deal, in those days the nearest skatepark was in Rockford, Ill. The Sky High skatepark runs until 1997.

1993 Sky High opens another new location at 4649 S 108th Street in Milwaukee. The Racine location is soon shut down.

1999-2005 Polansky buys a trailer and fills it with wooden ramps, in effort to recreate the PUPIL jam of the past. Because of this the legendary Cass Street jams are held every month through the summer season.

2004-05 Polansky buys a building in Bay View and moves the store to its current location of 2501 S Howell Ave. Polansky felt the neighborhood possessed the qualities of a community he wanted to be a part of. A neighborhood where business owners and residents considered each other more and were interested in making things happen. The Howell St location provides the space for block party events and Polansky moves the Cass St skate jams to Bay View.


2008 The shop turns 20 and celebrates with a historical photo exhibit at Paper Boat Gallery.


2010 Polansky partners with local curator Faythe Levine and they create Sky High Gallery located in the back of the skate shop. Together they also curate the outdoor Temporary Mural Project on the building that features local artists for 3 month durations promoting positive messages for the community.


2011 Polansky partners with Classic Slice Pizza and local car club The Cheaters to host “Wheel Night” in Bay View. The bi-monthly summer event happens the second and fourth Wednesday of each month and celebrates all things with wheels.