Art vs Craft: the GRAND FINALE

Today I announced big news, 2013 will be the last Art vs Craft!

For those of you not familiar, AVC is a show I've been producing in Milwaukee since 2004 inspired by participating in the first Renegade Craft Fair in 2003. In the early years I produced 2 events a year, one in the summer and one in the winter. As the production for Handmade Nation began to pick up and occupy most of my time I prioritized a single show a year that has always fallen on the Saturday after Thanksgiving. Each year AVC has grown and turned into something bigger and better than I ever could of imagined. We moved through 4 venues with our growing pains and will end the story at the Harley Davidson Museum where we hosted the event last year.

Why? Well I'm not a believer that things have to last forever and I want to end the event on a high note while we still have momentum. I see all these other shows happening around the same time of year in Milwaukee and feel like makers have other opportunities to take advantage of. Those shows will have room to grow, people can start new events who have drive and passion and those events will nurture new exciting work. On a personal note, I am really excited to free up the time it takes to make this event successful to explore new projects for myself. The time and commitment a show the size of AVC takes to produce is immense and I want to let it go with grace, not total burn out. 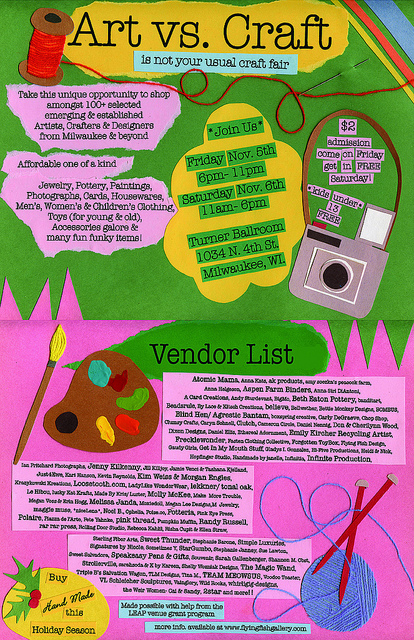 A few people have already approached me about taking the event over, of selling the name of the event and it's not going to happen. When my ex-business partner Kim Kisiolek and I decided to close Paper Boat Boutique & Gallery in 2009 we made the same decision. This is based in the fact that our blood, sweat and tears are intertwined with the name. If releasing the name Art vs Craft to another would mean the potential of my name being attached to something I am no longer involved with I'd prefer to just lay it to rest. So anyone who is interested in that idea, I'm flattered, but it's so exciting to start something from scratch. Let's all remember Art vs. Craft as a show that brought Milwaukee's maker community a little closer in the long lineage of other art events.

I hope you can all join us for the last year, it's going to be fantastic. Check out show details and the 2013 vendor list on the website.
Posted by Faythe Levine at 6:14 AM 0 comments